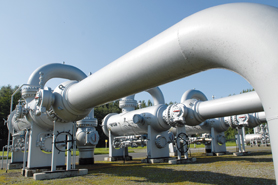 OPAL stretches some 470 kilometres from the landing point of the Nord Stream Baltic Sea pipeline at Lubmin near Greifswald through the federal states Mecklenburg-Western Pomerania, Brandenburg and Saxony south to Brandov in the Czech Republic on the border with Germany, where it ties into the Czech transmission system operated by Net4Gas.